If Yamamoto loses 'it', where does 'it' go?
From the NY Times: Mr. Yamamoto's Blue Period

Veiled and distant and dour, Yohji Yamamoto is the cockeyed pessimist of fashion. Hunched over his dinner plate one winter evening in Florence, he is an enigmatic outsider surveying a roomful of strangers who, as it happens, have come to celebrate this man whom hardly anyone knows much about.

The dinner -- in honor of a retrospective of Yamamoto's work -- is being held in an unlikely setting, a gilded room in the Palazzo Vecchio, the most famous of the local Renaissance palaces, decorated with fleurs-de-lis and a Donatello sculpture of Judith lopping off the head of Holofernes. You might say that there is something slightly disembodied about Yamamoto as well, as he sits center stage in a room where the Florentines usually honor heads of state. Who are these dignitaries, he seems to be thinking, these functionaries and local nobilities, both minor and major, and what are they to me?
The crowd this evening is aware that the guest of honor, a small 61-year-old man with a tidy athlete's body and an oversize head fringed with scruffy long hair, is a legend. They are also conscious of the fact that he is the subject of an unprecedented exhibit across the Arno River at the Pitti Palace, in which garments from a long career are arranged -- in what curators pretentiously term ''interventions'' -- throughout a series of galleries filled with academic marbles, Italian naturalist pictures and a lot of Napoleonic bric-a-brac.

But that is probably all they know about Yamamoto, whose work is frequently characterized in terms of genius and who occupies a central role in a design lineage as long as it is surprisingly robust. Look around the fashion landscape, and you will find it populated by Yohji disciples, and not just among the ranks of art dealers and architects for whom his clothes have long been a default uniform.

In the three decades since Yamamoto came on the scene, his once radical ideas have excited colleagues as diverse as Junya Watanabe, Jun Takahashi and Martin Margiela. His odd shapes and skewed proportions have informed an entire generation of Belgians and lately seem to be turning up everywhere, thematically threaded through collections as unalike as those of Marc Jacobs and Miuccia Prada and even highly praised newcomers like the American Jasmin Shokrian, who was not even a decade old when Yamamoto first showed in Paris. ''Right now there's a big Yohji influence,'' Carine Roitfeld, the editor of French Vogue, said recently before the start of a D&G show filled with retreads of the late-punk 80's. ''A big feeling for this intellectual girl. No more names, no more logos. It's a good mood to revisit, I think.''

It is not just the nutty precincts of the fashion cognoscenti that have felt Yamamoto's influence, however. With his Y-3 line of sportswear, produced in collaboration with Adidas, Yamamoto has introduced new generations to his austere notions about how people look and move and understand themselves in clothes. He is, as Julie Gilhart, fashion director of Barneys New York, suggested, ''probably the only designer you could name who has 60-year-olds who think he's incredible and 17-year-olds who think he's way cool.''

Yet none of this seems to matter to Yamamoto at the moment. In truth, he tends to cringe at the fuss. ''I always hated the idea of retrospectives,'' he said to a reporter, speaking so quietly, he might as well have been talking to himself. ''A retrospective, to me, is just proof of all your mistakes.'' 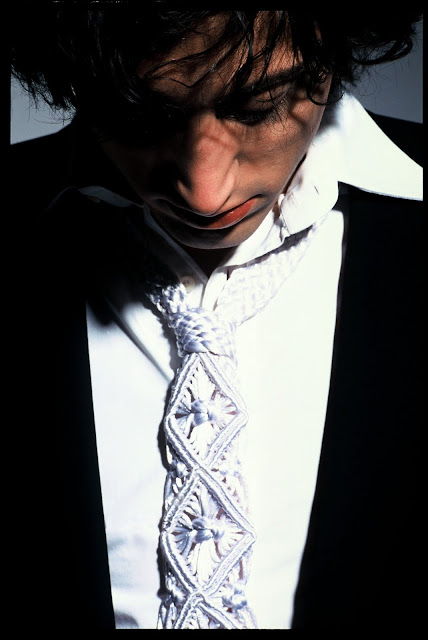 best tie i have ever seen...
LOVE me a little macrame... 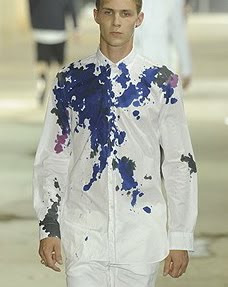 
inspired by rustic soups from the south of France...
best served with some crusty french bread...

i had very few pairs of pants...
all black...no jeans...
in a variety of styles...all with stretch of some sort...
mostly high to mid-waisted...
they were all pretty pricey...very good quality...
and i had each one tailored so they fit like they were made for me...

that was many years ago...
all those pants served their purpose and lived a good, long life...
but most of them are long gone at this point...
and i have changed sizes several times (up and down) since then...

now i find that i am seriously lacking any pants that fit me nearly as well as any of those pants did, way back when...
i need to find myself an excellent tailor and invest in some alterations...
it's just so much better...
Newer Posts Older Posts Home
Subscribe to: Posts (Atom)